In the month of July 2018, 21-year-old Sunith Rao embarked on a 2 month long flying trip to Italy, Spain & Macedonia his father’s blessings and mine. This was his first solo overseas adventure and it was his plan to visit and fly with old of Nirvana friend Chicco (Enrico Pattusi of  Flylibel Parapendio)  in his little village Taceno, Italy … and then move on to Ager, Spain for the Gin Wide Open Compettion and from there on to Krushevo,  Macedonia, a mecca for  paragliding comps where he was scheduled to take part in two more comps. Here are the highlights of his trip.

Chicco happened to be doing an SIV course at ‘ Cornizolo” a site overlooking lake Como when Sunith got there and this turned out to be a great opportunity for him. While Chicco’s students took off and did their tasks over the water, Sunith took off hoping to cover some distance and enjoy Como from the air.  He landed up doing a 50 km flat triangle and was pretty thrilled with himself. After two weeks of pizza, pasta and flying at the scenic Giumello site he bid goodbye to Chicco as  Barcelona beckoned.

En route to Ager he squeezed in a visit to the Camp Nou to pay his respects to his favorite  ‘Team Barcelona’ . The sights and sounds of Barcelona did not distract him further as he had an eye on the weather forecasts and good winds at Ager beckoned. 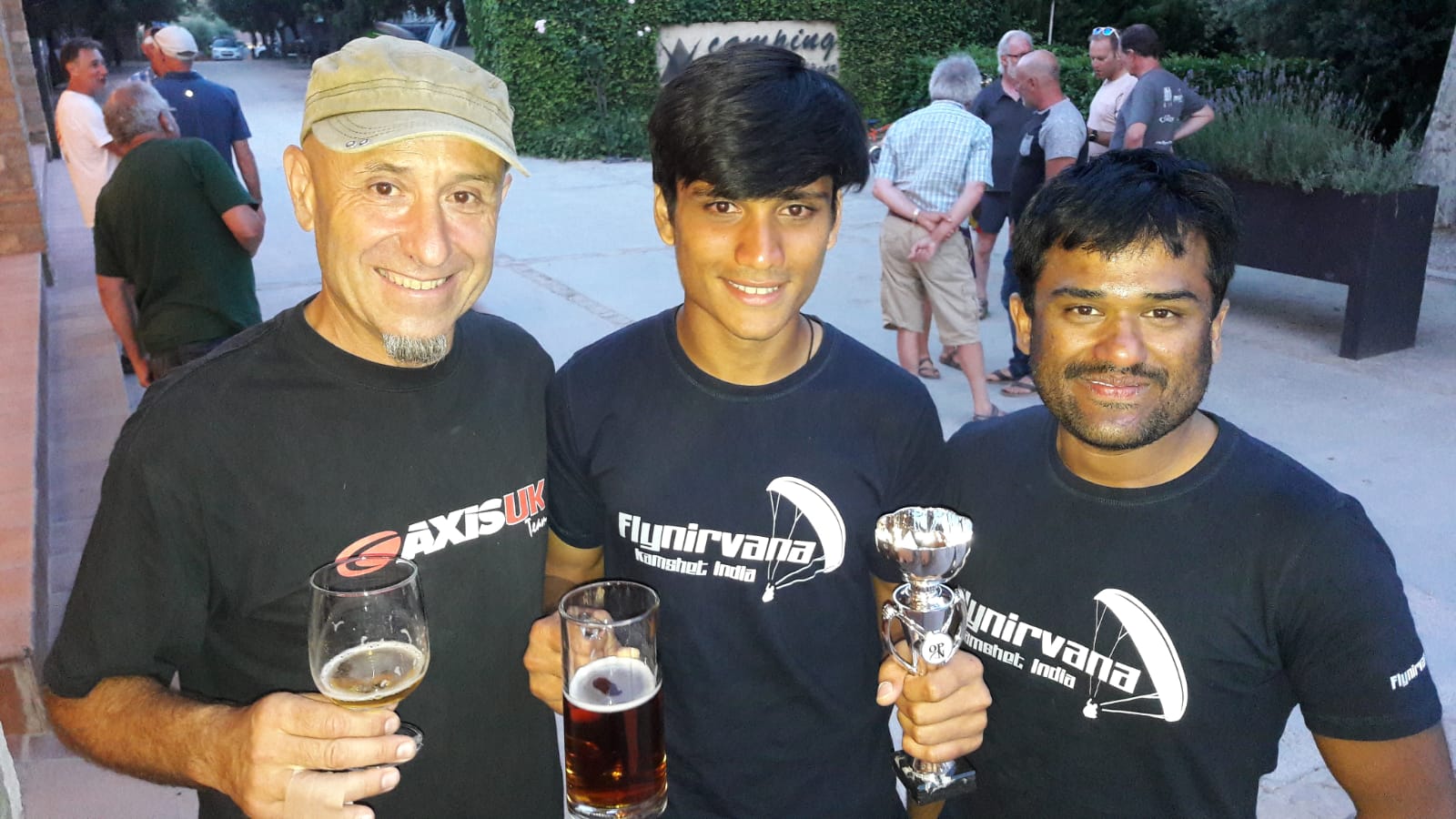 In the Gin Wide Open, he came away with the first place in the leisure class making the Fly Nirvana family proud and his hosts Nicky Moss and Geordie Pensalo of FlyAger very happy. Sunith had a great start in the comp as he finished with a joint first with Gin team pilots Richard Bungay and Yuki Sato on the practice task , but ironically  scored 0 points for that day as he forgot his  tracker. This made him the most popular pilot in the comp.  Sunith says, “It was good lesson though as I’ll never make that mistake again and anyways that day’s task didn’t count as it was a practice day.”

Sunith had two days of flying at Krushevo before the start of the first competition. On the first day itself he treated himself to a 35km flight to Bitola at the Greece border.

Ozone Krushevo open:  The comp began with bad weather.  It was either too windy or it was raining. This was surprising as it never rains at that time of the year. Sunith says “After the buzz and excitement at Ager I was forced to use my parawaiting skills. At the end of the day, I still managed to finish 2nd in the recreational class and 4th overall and my team (Indo Brit Alliance) managed to take the first place by a margin of almost 500 points. I was not too excited about this win though because there were only 25 people participating in this comp.”

Russian Estonian  & Krushevo Open: “The weather turned bad again and here too there were multiple tasks cancelled..  In the end there were only 3 valid tasks. I made some memorable mistakes and learnt the value of patience amongst other things.”

This was supposed to be his last comp. The FAI pre world was to be held at Krushevo within days of the RE Kruesheo Open.  Sunith had by now sampled the buzz of competition flying and was keen to pack in every opportunity to learn.  He managed to get a last minute spot in the FAI pre world thereby getting one more comp under his belt.

This competition was a warm-up for the organisers who will be responsible for holding the FAI world championship at Krushevo next year so it was full of high-level pilots from all over the world who will potentially be participating in the World Championship 2019 and Sunith was really excited to secure a place in this Competition.

“Until now the biggest task I had flown was 65 km, while in this comp that was the size of the smallest task. I was totally excited at the prospect of flying such tasks and I knew they were achievable for me as the weather had improved.”

The highlight of this comp for me was the fact that I made it to goal on two days. Some pilots were surprised to see me making it to goal in my EN B Rush 5.

He left the day after to return to Mumbai, India leaving behind Krushevo and the world of flying and returned to Mumbai India with his head and his heart still in the clouds at Krushevo.