A little late but still excited to share one of the best adventure sport stories I’ve had the honour of participating, writing and shooting. Featured in#SpiceRoute magazine’s June 2018 issue.  🙂

A friend tagged us in this FB post and we were pleasantly  surprised to find that Nirvana Adventures had been featured in the Spice Route magazine.  Thank you Parakshit Rao for your kind words. It was a pleasure hosting you and giving you your first taste of free flying. 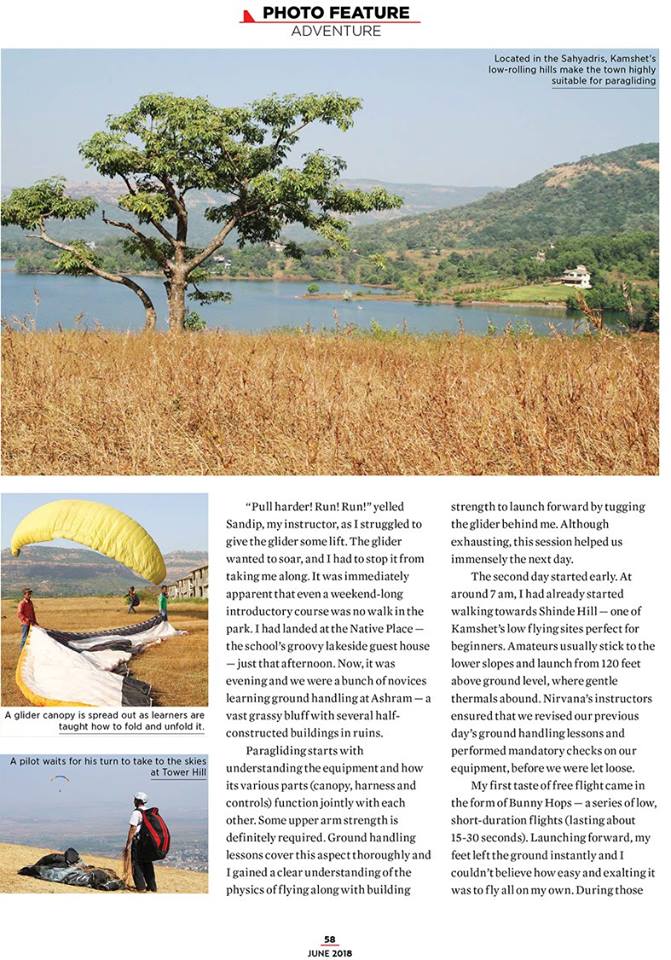 Since the 1990’s a large number of paragliding pilots and enthusiasts have flocked here during the flying season. This is where i earned my flying stripes through Nirvana Adventures a reputed paragliding school.

My first taste of free flight came in the form of Bunny Hops. A series of low short duration flights. launching forward my feet left the ground for the first time and i couldn’t believe how easy and exhilarating it was to fly all on my own.

Nirvana Adventures friendly instructors will rigorously encourage you to learn flying and landing safely through all the days of your course.  There are advanced courses  as well but the two day introductory course is perfect for beginners to get a first hand feel of paragliding over a single weekend close to the city.

I chose Nirvana Adventures for its safety record and and affordable package that included accommodation and meals in their lovely guesthouse Native Place overlooking the scenic vadivali lake. The property’s location is stunning and the homely atmosphere is complemented by native trees, veggie gardens, hammocks, picnic tables and friendly staff.